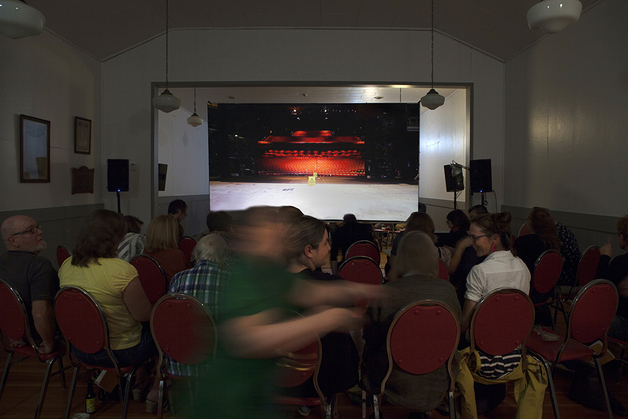 It is my hope to present Sidney Sydney in cities of the same name, across Canada and Australia.

Sidney Sydney allowed me to widen my scope beyond past re-presentations and investigations into the labour inherent in weaving, and focus my artistic practice on larger global concerns, through the archiving of near extinct mechanical sounds, while still remaining true to themes of labour and the disintegration of the body through a new investigation into the subject of the curtain.

The sounds of original mechanical winches lowering and raising various stage, bar and safety curtains inside the Joan Sutherland Theatre at the Sydney Opera House were recorded on March 2nd, 2015, by sound designer Emma Duggan (AU), while on an International Canada Council for the Arts Residency at Artspace in Sydney, Australia. These winches were once located above the stage in what is called ‘the grid’. 10 individual winches within this ‘grid’ were audio recorded while carrying a particular curtain, or load, and at varying speeds. The winches carrying the house curtain, safety curtain, lighting bar and portal bridge are some examples of the over-stage machinery recorded. Sidney Sydney was a project organized with the aim of archiving these sounds.

This project was made possible by the Canada Council for the Arts, Video Pool Media Arts and the Manitoba Arts Council.